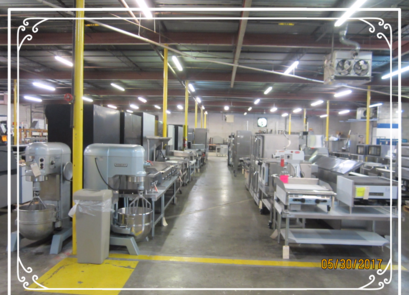 Vick Wholesale (originally named) was founded in 1975, selling new and used restaurant equipment, and was relocated to Atlanta in 1978.

We began selling equipment over the next 30 years to many of our local restaurants and operating in Atlanta today.

Here are a few of our long term customers, we have serviced over the years:)

In 1981, we began a journey with Longhorn Steakhouse. The original founder, George McKerrow, Jr. Over the next 20 years we supplied equipment for over 150 restaurants.

In 2002, Ted Turner of CNN, and George McKerrow, of Longhorn Steakhouse, founded Ted's Montana Grills. During the next 9 years, we provided kitchen equipment for over 50 Stores nationwide.

In 2004, the company was sold. I continued to remain with the company as a consultant, until November 2010.

In 2010, The Company, was transition and is operating under the name of:

The Company is owned and operated by Peggy Hajosy Enterprises, LLC,

We are a Georgia Auction Company, with an Ebay Internet Store.

The Company is building with these new changes:

Beginning in 2011, the business core, is Auctions and Liquidations. These are held in restaurants which have been forced to closed, due to the changing of the economy, over the years. We hold Auctions/Liquidations for Restaurant Owners, Banks and Landlord Owners/Leases. (See our past Auctions Tabs).

Being a Dealer, we sell New Equipment, Used Equipment and Scratch & Dent. Our Customers, are on a more limited budget. Used equipment versus new is more cost effective. We feature Replacement, Packages, Start-up's and Design Build out.

​​Contact us today, for more details on an Auction or Liquidation or any of your Equipment needs.